With technology advancing at an exponential rate, loss prevention professionals are looking for new ways to secure merchandise while also making a store more attractive and inviting.

According to an article by the Loss Prevention Foundation, “The modern loss prevention mission is much less about undercover investigations and more about proactive measures designed to prevent losses.”

Loss Prevention has expanded beyond exclusively protecting merchandise. With fraud, organized crime rings, and other criminal acts becoming more sophisticated, loss prevention professionals have quite the task on their hands trying to reduce shrinkage and enhance the customer experience.

The next frontier for protecting merchandise is right under retailers’ noses. In addition to access control solutions, RFID is surging in popularity as a tool for better inventory management and supply chain visibility – as statistics demonstrate. For example, Auburn University’s RFID Lab reports that 96% of retailers plan to start tagging apparel with RFID this year, and IDTechEx projected that the number of RFID apparel tags sold would increase to 8 billion in 2017, from 3 billion in 2014. 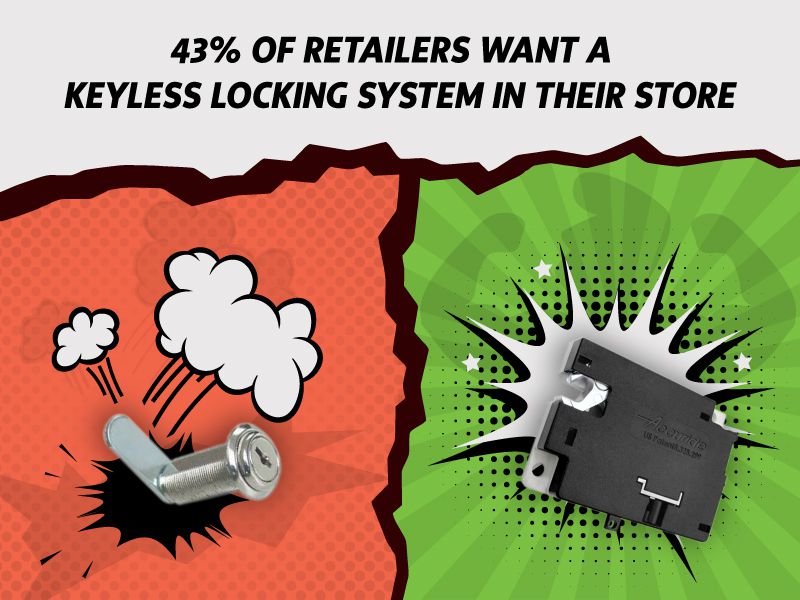 According to viability report done by UCLA, 43% of retailers prefer a keyless locking system to traditional CAM locks.

Senseon is proving that RFID technology is equally useful in driving a new wave of loss prevention tools designed to take a proactive approach to reduce shrinkage, while also spurring efficiency in beautiful, distraction-free environments.

Retailers are finding it harder to reduce shrinkage because of difficulties managing inventory. This is why more and more professionals are seeking new tools to help inventory management.

For starters, Senseon’s RFID-powered locks are up to four times stronger than traditional cabinet locks, making them nearly impervious to strong-arm burglary attempts.

Because it’s hidden in the cabinet (using RFID card, fobs or wristbands with readers instead), Senseon doesn’t require any keyholes. Meaning, potential thieves aren’t tipped to where locks are that protect valuable merchandise.

Features such as touch-release and auto-open are available to be designed with no visible hardware–another theft deterrent.

Senseon helps retailers of all sizes to streamline customer transactions and boost sales by keeping merchandise readily available for front-end staff to access for customers on the sales floor.

The hidden RFID reader makes it easy to bring RFID into any retail setting. Knowing you may have other RFID cards, we designed a tag that can be affixed to any card and grant the same access as a key card to streamline key management further.

Commercial environments, retail, in particular, are subject to unpredictable circumstances. Senseon’s fail-secure manual override switch allows merchandise to be removed and stored in a safe location such as a vault in the event of a power outage.

We know sales associates often get busy and can forget to relock a cabinet. Luckily, this furniture access control system relocks automatically upon closing. By pairing this feature with our integrated locking slide solution, with patented easy-close feature you’ll get a soft closing, self-locking cabinet.

Senseon is the leading-edge solution for all types of retail stores. We look forward to discussing how we can help make your business more efficient.

To see how to integrate Senseon into your store, download a design guide.

Stay Up To Date

Sign up for our newsletter and have the latest Senseon news and developments delivered to your inbox.